Edictal Citation and Substituted Service (How to Divorce a Missing Spouse)

Edictal Citation and Substituted Service (How to Divorce a Missing Spouse)

When you want to get divorced and do not know your spouse’s whereabouts, you can proceed with your divorce by using substituted service or edictal citation applications.

Ordinarily, the Sheriff of the Court must serve the divorce summons personally on your spouse. 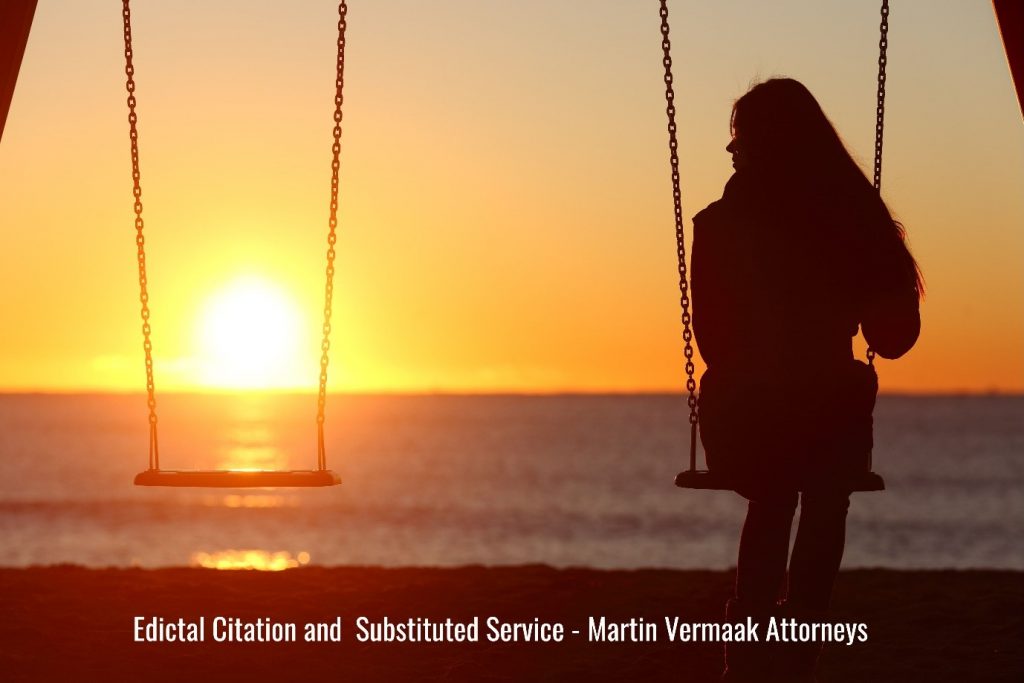 What is Substituted Service

When you need to get divorced in South Africa and know that your spouse is somewhere in South Africa, but you do not know where exactly your spouse is, you can bring an application for Substituted Service. In this application, you must ask the Court for permission to serve the divorce summons in a specific way instead of personal service.

Substituted service is permitted where the Respondent is believed to be in the Republic of South Africa.

You must bring this application at the same time as the divorce summons.

The Court may order any manner of service it deems appropriate, for example, publication in a newspaper, service on family members or friends, service by fax and even e-mail, if a proper case is made out.

This list is, however, not exhaustive and will depend on the facts of each case.

The Court must also determine the period within which you should file notice of intention to defend.  This must be provided for in the Notice of Motion. 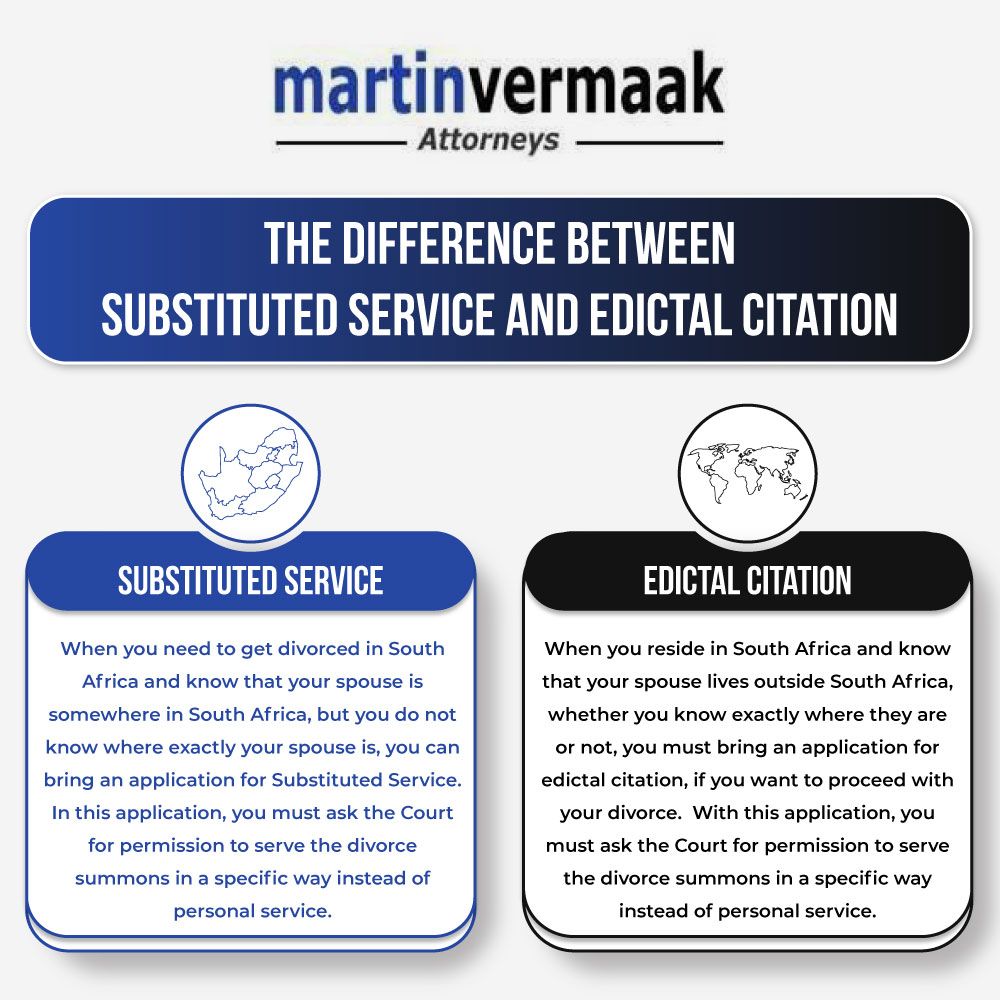 When you reside in South Africa and know that your spouse lives outside South Africa, whether you know exactly where they are or not, you must bring an application for edictal citation, if you want to proceed with your divorce.  With this application, you must ask the Court for permission to serve the divorce summons in a specific way instead of personal service.

What is the difference between Substituted Service and Edictal Citation?

Edictal Citation affords permission to the Applicant to serve the Divorce Summons on their spouse in a foreign country.

A summons in a divorce must ordinarily be served on the spouse (Defendant) in person.

Edictal Citation is, therefore, an application according to which a legal document such as a divorce summons is served by a Sheriff (in some countries known as a “service processor” or a solicitor) or in another way in a different country.

The Court can make any order that they see fit, and service can even be done using electronic technology, including social media.

In the matter of the CMC Woodworking Machinery Case, Judge Steyn J stated that:

“Changes in the technology of communication have increased exponentially and it is therefore, not unreasonable to expect the law to recognise such changes and accommodate [them].”

“Courts, however, have been somewhat hesitant to acknowledge and adapt to all the aforesaid changes and this should be understood in the context that courts adhere to established procedures in order to promote legal certainty and justice.”

The Judge stated that the person bringing the Application (the Applicant) must show the Court that the service in a specific way is warranted. There is a real prospect that you will bring the Notice under the Respondent’s attention (the missing spouse).

Nowadays, in our hi-tech world, a couple can quickly get married in one country, spend most of their married life in another country, and get divorced in a different country altogether.

It is nothing new for a couple to get married in South Africa, move to, say, New York or London, discover things are not working out, and for one of them to return to South Africa.

Strange then that despite all the above, it still is not true – contrary to popular belief – that a Summons can be served via e-mail or by registered post in divorce proceedings. (This can only be done with the Court’s permission).

With Edictal Citation, if your spouse lives overseas, the Court will order that the divorce summons is served on the absent spouse at either their home or their place of work or in any other way that the Court directs.

Suppose your spouse lived overseas but has disappeared. In that case, the Court will give directions in the form of substituted service, e.g., service upon a relative or, perhaps, the Attorneys that acted for the absent spouse whilst they were in South Africa and elsewhere.

Substituted Service and Edictal Citations are then used in conjunction.

It is important to note that the Court will require that you, the Applicant (Plaintiff):

• Are domiciled in the Court’s jurisdictional area on the date that your Divorce Proceedings commence;

• That you are usually resident in that area;

• That you have been living there for not less than a period of one year immediately prior to that date.

In the case of a spouse who has disappeared, you will have to satisfy the Court by way of your Edictal Citation Application that everything possible has been done to trace the absent spouse. This is because personal service is preferable and the least prejudicial form of service.

Edictal Citation involves communicating and corresponding with people in a foreign country and sending documents overseas.

After the Summons’ service in a foreign country, a spouse will typically have a month to defend the action.

If they ignore the Summons, the matter may be set down for hearing on a date arranged with the Registrar of the High Court or the Regional Court, and you can get a default judgement against them.

If you need to divorce a missing spouse, you do have recourse. You can get divorced by bringing an application for substituted service, edictal Citation or by using a combination of these applications.