A contested or opposed divorce is an acrimonious divorce where your spouse disagrees with either the divorce, the division of assets, issues relating to minor children or spousal maintenance. It is as such the opposite of an uncontested or unopposed divorce. 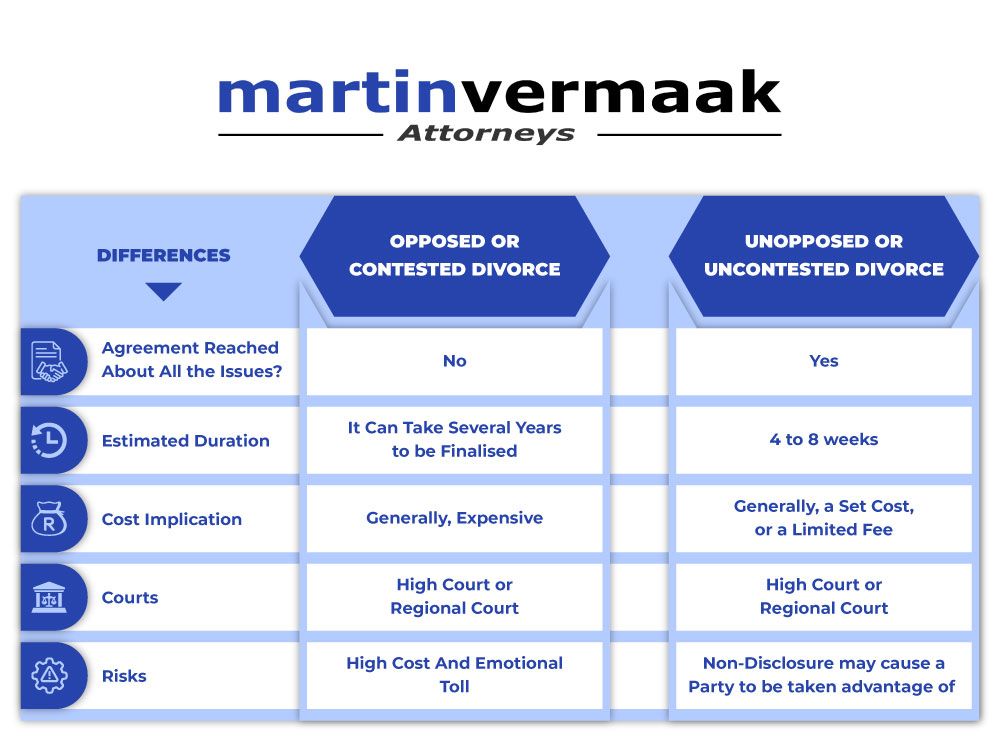 Whether or not a divorce attorney represents the spouses, even if the spouses agree on everything except one aspect, the divorce will be a contested divorce.

So, even if the Parties agree on the division of the assets, on where the Minor Children will live after the divorce, but they cannot agree on whether one spouse must pay spousal maintenance to the other, the divorce will be contested.

How Long Does a Contested Divorce Take to Be Finalised?

A typical contested divorce can take a few months to a few years (three years or longer is not unusual) to be finalised as the court must adjudicate the issues in dispute. The South African Government states that an opposed divorce takes between 2 and 3 years to be finalised.

The Issues in Dispute Can Be Anything and May Include Any Of The Following Issues: –

Parental Rights and Responsibilities include who will be the primary caregiver of the minor children after the divorce, child maintenance, and contact for the non-primary caregiver.

Division of assets in terms of the Ante-Nuptial Agreement or of the joint estate. I.e., who will keep what assets and what liabilities?

Spousal maintenance – if it is payable or not, and if so, in what amount.

What Is the Cost Of An Opposed Divorce?

This is because an attorney cannot easily estimate a cost due to many variables such as a provisional application that may have to be brought and the issues in dispute.

An opposed divorce can cost from R20 000 to several hundreds of thousands of Rands.

What Expenses Must Be Paid During An Opposed Divorce?

If the Parties cannot afford these experts, presenting a party’s case to the courts may be more difficult.

It is even more critical to appoint experts if a party fails to co-operate or actively hides assets in their estate. Sometimes a spouse will inflate their liabilities.

When Should You Contest a Divorce?

While many people will tell you to get an unopposed divorce and not to contest your divorce, there are times when you should oppose your divorce.

The Concealment of Assets or The Inflation of Liabilities.

It often happens that a divorcing spouse conceals assets from you and your Attorney.

When the court must decide, or if you plan to settle the matter and do not know the whole story, you may settle the divorce to your detriment. This mostly happens when a spouse owns their own business, or they have shares in multiple companies.

Besides this, a spouse may artificially inflate their liabilities, so they do not have to pay out as much as is due. They can do this in many ways, such as taking out loans to ‘pay off their expenses’ before or during the divorce.

The Best Interests of Children

If your spouse wants you to settle and asks for something that is not in the best interest of the minor children, you should oppose the divorce.

As an example, a parent may want primary residence of the minor children, despite them not been actively involved in the children’s lives.

It often happens in practice that a spouse devotes their entire life to the children’s upbringing.

The spouse, as the breadwinner, then refuses to pay for spousal maintenance at divorce, and the other spouse cannot generate an income or can only generate a basic income.

The Five Steps of Divorce Procedure: Preparation of An Opposed Divorce Involves Various Procedures And Includes The Following Five Steps:

Understanding the procedure better should give you some idea of the way forward. Often, when you understand the various steps and stages, it can help to reduce the fear of the unknown and prepare you for the way forward.

During consultations with our clients, we obtain a complete overview of the case by asking many questions.

We will also require documentation from the Client to understand the legal issues and facts of the matter.

Issuing of the Summons

Once the documents have been signed, they are delivered, first to the applicable court to obtain a case number and then to the Sheriff concerned – this is decided upon according to the jurisdictional area applicable.

These documents are known as the Combined Summons and Particulars of Claim, together with annexures.  They are generally served personally upon the spouse of our Client, who then has ten working days to respond.

Once the ten days have passed and a notice to defend the matter has been received, the Defendant (the spouse) should file a Plea and a Counterclaim.

Settlement can occur at any stage of the divorce, meaning it could happen during the preparation phase or just before or during the trial.

However, the standard and most acceptable place would be after filing the pleadings and after the discovery process.

If the settlement is successful, we will draft a settlement agreement that sets out in writing all the details that have been discussed and agreed upon by both spouses.

Both spouses then sign this in the presence of the witnesses concerned. To reach a settlement at this point will make things a lot easier and less expensive.

Once the settlement agreement is signed, the matter may be placed on the unopposed court roll.

We ask the Client to bring specific documents – many documents – to amass as much relevant information as possible.

The Client will be asked for bank and credit card statements, property documents; emails; pension data; and many other documents.

This helps the attorneys understand their legal opponents’ focus and ensures that neither spouse hides anything to gain an unfair advantage.

Most matters don’t get to this stage as settlement usually takes place before Trail.

However, in the unlikely event that the case proceeds to trial, the length of the trial – i.e. how many days it is expected to be in court – is usually decided by the number of matters in dispute.

Some Trials might last a day, whereas others could go on for several days – and in some cases even longer.

An opposed divorce takes time to get to court for a trial.  Not many divorce cases will go on trial.

The best-prepared spouse typically has the best results in an Action for divorce.

What to do if you cannot locate your spouse and you want to get a divorce?